In thirteen years of my own discovery and working with some of the world’s biggest brands, I’ve developed a formula that leverages proven success patterns to craft a more persuasive way of communicating through the screen. I didn’t have a good name for this formula until the day I remembered the first time I subconsciously used it—in the email I sent to my Professor offering him the Irish pub map. And it hit me: Be personal. Be useful. Be brief.

Effective digital messaging that rises above the noise follows these three rules:

If you can craft your message maximizing those three steps, you will register as Friend or Server, and you’ll avoid being categorized by your recipient’s brain as a Foe or Seller. You will inspire an action. You will ignite some kind of engagement. You will open an opportunity.

When you’re not sure what to write or how to approach someone, just head to the PUB. Sounds simple, right? Fair warning: writing a message that’s Personal, Useful, and Brief can be challenging. In fact, it’s usually much harder to be concise than to just write out a long sales pitch. Being succinct is always more challenging than showing up and throwing up.

But taking the time to research and create the perfect PUB message is your digital differentiation edge. It determines whether you are heard or ignored. It decides whether your message is processed as Friend or Foe, Seller or Server.

Which one will your recipient decide you are?

The way I use the question “What if”  is to think outside the box and set goals that are crazy. I call it write music that you can't play. Set goals for yourself where you don't know how, but you know what. Don't start with what's possible. Start with: what's cool, what's right.

When you have a goal like this, from my experience of goal setting, three things are going to happen:

#1: When you set this goal, you'll have a completion date, and you probably won't make it. We usually don't make it in time. Why? You've never done it before. This is a new thing. So you're setting out to do something that's not been done and you don't know how long it'll take. Be ready for it to change.

#3: I want you to remember this for the day you get back at work. To do things you have never done, you have to start by doing things you've never done.

One of the boldest goals I ever set for myself was to learn how to play Bohemian Rhapsody on the guitar. It took a lot of work and accepting these three things as they happen.

How to Introduce a Keynote Speaker 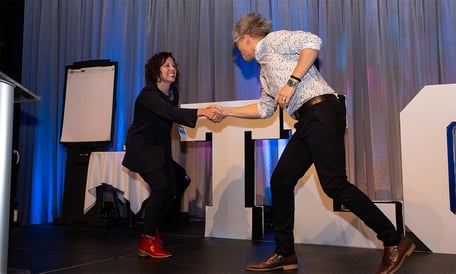 The person introducing a keynote speaker gets the audience's attention and sets the tone for the talk and for the experience. To make the most of your presentation of presenters – I thought I’d share a few industry tips.

A successful speech is “all in the delivery” as they say. Be thoughtful, be yourself, and be prepared and you’ll do just fine! If you want to learn more tips and tools for your next event or how to hire the best keynote speaker possible for your organization, give me a call. We specialize in bringing remarkable speakers together with clients from all over the globe. We’d love to be of service!

Do your people feel heard?

Our world has changed psychologically, and specifically because of social media. What do I mean by that? Go back with me twenty years ago, before social media existed. There was a cultural understanding that if you were sitting in a room and you did not hold a position of leadership, you did not have a say. Generally, we were okay with that. We understood that. It's just how the world worked. But today, that's not how people think.

Everyone, especially the younger workforce, because of social media, has a voice and a platform for that voice. They're used to being heard and therefore they think they should be heard. If you hire an eighteen-year old intern today they think they have a say tomorrow. You might not agree with that. You might even think that's really stupid.

People support what they help create

The 3 Qualities of Global Citizens

Chris Bashinelli describes the importance of tying our purpose into a purpose that is greater than ourselves. 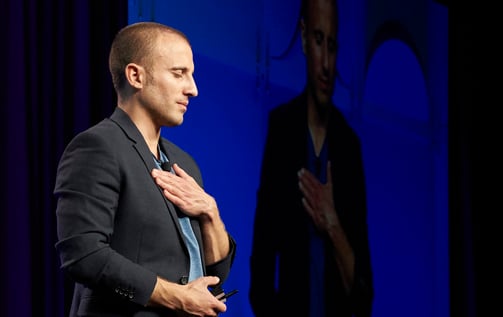 It's not about working harder. It's about working smarter. I'm going to propose an idea: take five focused minutes at the beginning of each day. Sit down at your computer before you start working. Sit down and breathe. Close your eyes if possible, and see what ideas come to you. Rather than going with that initial urge to check email, to respond to text messages, allow some space and ask yourself, “What is the most important thing I have to do today?”. Or perhaps don't ask yourself anything, just allow the space to be there. That space will translate in the next few minutes to the most important task that you have to complete that day. Or maybe it will arise in the form of a new idea.

This is called mindfulness and it can be incredibly beneficial during our work lives. According to an article in Mindful.org, “at times of excessive pressure at work, practicing a short mindfulness exercise can be a savior.” Most find the slow-down a struggle but it can lead to incredible results in our day-to-day lives. The more you do, the easier it will be.

Slow down, be mindful for new ideas

It's easy to keep yourself busy. It's easy to work 10 or 12 hours a day. It's easy, but perhaps it's not the wisest thing to do. What's wiser is to give yourself some space in your life where you can allow new ideas to come, where you can allow your creative expression to come through. Some of the greatest ideas I've had, some of the greatest exercises, some of the greatest stories haven't come when I'm sitting down at my desk writing and responding to emails. They've actually come after I finish eating breakfast or when I'm out for a hike allowing what I've been focusing on and thinking about, to bubble to the surface with a new idea.

Did you know that every conscious decision that has ever been made has been made at least twice?

As humans - the first thing we do, before choosing to take an action, is to visualize ourselves completing that action. We take the time for a hypothetical run through  in our minds eye. And only once we can see ourselves doing something, do we then actually choose to move forward with that action.

This means that if you want more people to take action, then your ability to have them see themselves taking that action, prior to you inviting them to take that action, will enhance their choosing to respond positively to the ask.

We are talking about allowing others to paint pictures in their own minds and insert these images into their memory. This is content creation for the human mind.

Watch Phil discuss this idea at a recent event:

Content creation holds huge value in the world of marketing, yet the most powerful tool for content creation is in the minds of the people you are looking to influence. The human brain is an incredibly powerful "search engine" and by feeding it with quality content - the more likely this content will be recalled when decisions need to be made.

Leaders, sales professionals and entrepreneurs are all in the business of influencing others and an often overlooked area of influence is our ability to support others in their decision making process. Taking the time to allow others to see themselves in situations that are the result of their action or inaction is a fabulous tool to encourage them to choose that very action.

There are really only three types of situations that you should look to have someone see themselves in that will assist them to do as you are asking:

Your tool for creating these images in the minds of others are your conversations and quite often it's the quality, and not the quantity of these conversations that has the greatest impact on your results.

Put simply - the difference between you winning and losing could be knowing Exactly What to Say, when to say it and how to make it count.

When you can reach for the right words, at the right time you are far more likely to achieve the right result.

Changing your words can very easily change your world.

Keynote Speaker Phil M Jones describes how using the magic words from his bestselling book, Exactly What to Say, can help you sell more and help you lead your clients to better decisions. Phil speaks on topics such as Leadership, Customer Service, Sales and Marketing, Business Growth, Engagement and Performance.

What To Look For In A Sales Keynote Speaker

This time of year, many organizations are planning their 2020 sales kickoff events! Hiring a great sales keynote speaker can help you maximize the impact of your event and motivate your sales team to create breakthroughs and bottom line results.

What are some common denominators of the world’s best Sales Keynote Speakers?  Let’s take a look…

Helping organizations develop and utilize the best-in-business practices and innovative strategies is what you can trust from cmi speaker management’s sales and marketing keynote speakers. With expert ideas, savvy solutions, and top-tier tools – these speakers deliver exactly what audiences need to drive sales production and craft next-level marketing for their companies.

If you’re planning a sales kickoff event in 2020, give us call. We’ve got a shortlist of keynote speakers who would be perfect to both wow your crowd and send your sales through the room – all while making your job and life easier! How’s that for a trifecta? Let us help you have your best conference ever!