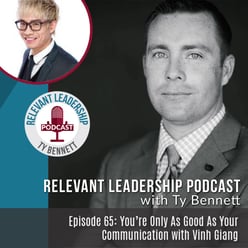 Ty: Why the focus on communication and what led you down this road?

Vinh: I think a lot of the times when we do the things we do, it's probably because of the impact it's had on our life. For me for a long time in my life. One of the things I do in my workshop is I show my students a video of me from about seven years ago. I freak out every time I look at it again. I can't believe that's how I used to communicate. What is really cool is I used to not want to show the students because out of, you know, pride but by showing the students, they kind of go “wow, you used to be really crap”.

It's cool because I didn't know that inspires them. For me, it changed my life in that I wasn't able to communicate to my parents effectively. I wasn't able to communicate to those I was working with, I wasn't able to express my value to love interest. Not being able to communicate well held me back so much as a magician as well. I lacked the ability to communicate well. I didn't realize how much I was missing out on. Only in hindsight, is that so painfully clear. Every time I play that video, there's a moment in the workshop I'm kind of inspiring myself to teach even more because of how much I realized. Now having the luxury of having students and the videos that they send me, you know, a year down the track or two years down the track, I go back and I dig up the old videos. It just inspires me so much to do what I do know, because seeing that transition is unreal.

Ty: Yeah, I think it affects all of us, right? Communication is such a universal skill to develop. I often find that people think it should be natural, right? You have a young son and I've got kids, and it’s not a natural skill. You have to develop that. You have to have to work on that. One of the great points that I've heard you make before that I think is maybe a good way to kind of kick this off is, is, regardless of how good you are, how proficient you are at what you do, let's say that you're a great leader, and you have the knowledge, the skills, the competency, that the way that you're perceived will be in direct proportion to the ability you have to communicate that value. Do you want to speak to that a little bit?

How many people are sitting there in boardroom meetings, not voicing their thoughts, their opinions and their ideas? How many people in team meetings are not sharing their thoughts on how things could be better? Not because they don't know how things could be better, but rather because they're either either afraid to voice their thoughts and feelings or they don't know how. Maybe the last time they tried to voice an idea they couldn't do it properly. I didn't know how to do it well and then got shut down because of it. So to me when people talk about, oh, there's so much potential here, I think the pragmatic version is literally what we just spoke about. That as we improve their ability to communicate, we improve their ability to collaborate, share ideas, and to help improve the business.

Listen to the full episode here!

View all posts by Vinh Giang →