How will AI change your job - Mike Walsh

Will AI be the end of the radiologist?

Geoffrey Hinton, one of the world’s most renowned computer scientists has argued that ‘we should stop training radiologists right now’, and that as a result of AI, most would be out of a job within 5 years. But is this really true? Dr Hugh Harvey has a unique perspective on this question, having worked both sides of the fence - both as consultant radiologist, and also as leader in the AI space first at Babylon Health, and currently as the Clinical Lead at Kheiron Medical. Catching up with Hugh in London, I was keen to find out about the impact of algorithms on employment in the healthcare, and what it might mean to be a radiologist in the 21st century.

In an age of multiplying devices, platforms and social media channels - it can be tempting to forget the classic lessons of marketing and branding. On a recent trip to Miami, I caught up with Bruce Turkel, an author and marketing guru who has helped some of the world’s leading brands including Hasbro, Nike, American Express and Citicorp. We chatted about the challenges of marketing in this new fluid digital environment, and why some things - like discovering the authentic truth of your brand - will never change.

Peter Clines on transformation, teleportation and the secret history of America - Mike Walsh

I was in LA over Halloween, and so took the opportunity to look up one of my favorite genre-bending, sci-fi authors - Peter Clines. Peter has a number of brilliant books including ’14’, ‘The Fold’, and his latest, ‘Paradox Bound’, which he originally pitched to his agent as a cross between Neil Gaiman’s ‘Neverwhere’ and ‘Cannonball Run’. Growing up in Stephen King's hometown of Maine, his first epic novel at the age of eight was ‘Lizard Men From The Center of The Earth’. In the bright glare of the LA sun, we spoke at length about a wide range of geeky topics from time-travel to the occult, evil stars to parallel universes.

AI, smart homes, and the new battle for the living room - Mike Walsh

The war for the living room used to be simple: influence whoever was in charge of the family TV’s remote control. With the rise of the Internet of Things, smart speakers, and AI-enabled home automation systems - the home itself has become the next computing platform. To get a handle on what the future of smart homes might look like, I caught up with Alex Capecelatro in LA. Alex started his career as a research scientist for NASA, the Naval Research Lab, and Sandia National Lab. He later joined Fisker Automotive, ran his own startup, At The Pool, before creating Josh.ai, an AI agent for the home.

We Are All Software Companies Now - Mike Walsh 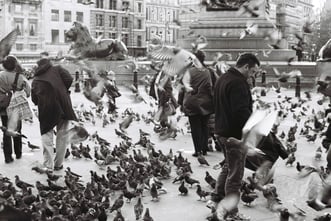 'What do you mean we need to be a software company?' asked Lukas Braunschweiler, CEO of Sonova, one of the world's leading manufacturers of high-tech hearing devices. I had just finished giving a talk to their senior leadership team at the gorgeous lakeside town of Stäfa, near Zurich. 'We already have lots of software engineers. Are you saying that we need more?' It was a fair question, and one I had spent much of the prior week thinking about, in a few unusual places. How many software engineers do you need to transform a company? Read the full article here.

Media, content and the enduring war for attention - Mike Walsh

Chris Van Noy is a thought leader in the media industry. He previously ran strategy for the global content infrastructure business known as Akamai, and over the last 12 years, has sourced, negotiated and closed high level media and technology deals and partnerships for companies such as NBC Universal, Hulu, ESPN, ABCNews, Microsoft, 24/7 Real Media and Disney. Over breakfast in NYC, I did my best to gain a crash course in the new economics of attention, and the secret infrastructure that makes today’s streaming platforms possible.

I met David, many years ago, at a cafe on Bondi Beach. Originally from California, he had moved to Australia for work, and for the last 20 or so years, had made a name for himself as a fashion photographer, whose work had been featured in international editions of Vogue, Elle, Cosmopolitan, Style and Shape among others. Then, about eight years ago, everything changed when a friend was diagnosed with breast cancer. Soon after, David began The SCAR Project which documented survivors of breast cancer. Following this series, David continued to dedicate his work to capturing often unseen aspects of humanity, including The Unknown Soldier, The Alabama Project, Grief Camp, and Naked Ladies. Jay’s photography has been published in the New York Times, BBC, LIFE, Forbes, USA Today, and countless other publications throughout the world.

Algorithms, human-centered design and the future of work - Mike Walsh

I caught up with Ross Dawson, a fellow futurist and an Australian native, on a recent trip back home to Bondi Beach. Ross is the author of four books including the Amazon.com bestseller ‘Developing Knowledge-Based Client Relationships’, and the acclaimed book Living Networks, which foresaw the social networking revolution. Over the famously strong, and excellent Sydney coffee we riffed on some areas of common interest, in particular the impact of AI on the future of decision-making and work.

Why Humans Will Always Play Better Chess, Even When We Lose - Mike Walsh

We live in a time of exponentially improving machines. First chess, then Space Invaders, go and most recently poker - our games now seem mere taunts in a struggle for supremacy between humanity and AI. Even in losing, however, we may learn something about what makes us special.

I watched a fascinating documentary about chess prodigy Magnus Carlsen on a recent flight from Hong Kong to Stockholm. The apex of the story was the epic showdown for the World Chess Championship between Magnus and his Indian rival Viswanathan Anand, that took place in the latter’s hometown of Chennai.

We tend to think of chess as a game 'solved' by AI, and yet watching the documentary made me reconsider this, and our broader relationship as humans to many of the activities that will soon be automated and driven by algorithms.

Like the original Rocky film that set a young Stallone against a pitiless, robotic Russian opponent, Anand in both temperament and style, was the polar opposite of Magnus. Anand and his team were heavily reliant on sophisticated chess analysis computers to generate options, while Magnus favored a more intuitive, spontaneous style.

The greatest fear expressed by Magnus before the match was that he would never get the chance to shift Anand from his prepared game plan and to think for himself. Sure enough, on the first day of play, Magnus struggled to overcome the sheer weight of an opponent who was essentially playing like a machine.

Then after a day of relaxation and hanging with his family, the real genius of Magnus’ playing style emerged: fast, unpredictable and highly intuitive. He effortlessly blew past Anand’s positions and became the youngest world champion ever.

People have described Magnus as the Mozart of chess - and are amazed at the creativity and speed of his playing, as if his strategy manifests from some alternate dimension. It is easy to be superstitious about what we simply don't yet fully understand, or have forgotten in a time when we simply expect machines to be better than us.

Chess was once thought to be game that was AI-complete. In other words, we believed that once we invented a computer capable of beating a top chess player, we would have also invented a computer capable of general artificial intelligence. Unfortunately, as former Chess champion Garry Kasparov discovered exactly twenty years ago, with enough computer power and some brute force algorithms - you can beat a top human player, without actually creating a truly intelligent machine.

When I interviewed Sean Gourley, the data expert famous for modeling the mathematics of war, he told me the story of how Kasparov would go on to establish freestyle chess, a tournament that demonstrated that as smart as these new machines were - they could be beaten by a good human/computer collaboration. Kasparov's 'centaur' team strategy was essentially the tactic adopted by Anand and his team - human agency and computation, hand in hand. And yet, against Magnus, the centaurs couldn't prevail.

Even in this age of automation, AI and algorithms - it is worth remembering the lesson of Magnus Carlsen and his highly intuitive game play. When it comes to breakthrough ideas, there is still no power greater than the human brain itself: the ultimate, almost magical, deep learning and insight generating tool.