The Future of Work

We love hearing back from our clients when they have a great experience with one of our speakers! This graphic comes from Ciscos recent keynote with Mike Walsh. 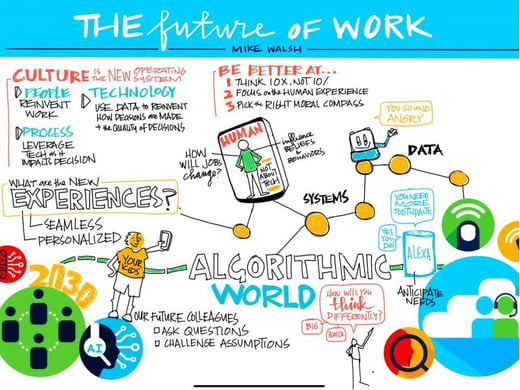 "It was fantastic meeting you on June 12 at Cisco’s Workplace Transformation Summit. We’ve had a phenomenal response from our customers who were in attendance at this invitation only event.  Our customers absolutely loved your presentation and raved about the concepts you shared… I know they are going to love your book, “The Algorithmic Leader!”"

Relatability and Your Reputation - Ty Bennett

Learn more about Ty Bennett and his Relevant Leadership keynotes!

Do You People Watch?

(Soooo many adventures in the last six months!!)

I do. I find it rejuvenating.

I was traveling the last 2 days and experienced what a lot of our clients do on a daily basis…travel delays. My outgoing flight was delayed by 4 hours getting me to the hotel around 9pm. On Monday, I was going full tilt from 6am to 6pm (this type of a day is not unusual for most of us).

When I got to the airport for my return flight, I was brain dead. I had work to do but I couldn’t think. So I just sat there - and I began to watch the people around me.

I saw a 20-something daughter traveling with her parents. She was on her phone a bit but most of the time she was fully engaged in conversation with her family. I saw a woman in a wheelchair who was traveling with a friend - they were so helpful to each other as they maneuvered her from one gate to another. I saw a man whose arms and legs were extremely short who was laying on a skateboard and just motoring to his gate. No one took special notice of him - he was just like all the rest of the travellers. I saw 2 little girls who were so happy to be able to move after their flight - they were giggling and running as their mothers were chasing after them. There was a young man sitting behind me who was watching videos and every once in awhile he’d quietly chuckle.

Who says we aren’t kind to each other? Or thoughtful? Or loving? Or happy? These things are all around us if we just look for them.

We are fascinating to watch - I highly recommend it.

If you haven’t seen the new biopic Rocketman that chronicles the life, love, and musicianship of Sir Elton John, it’s proving itself to be one heck of a box office hit. Powerful cinematography, extraordinary music, and packed with jaw-dropping performances.

In a recent keynote, one of cmi speaker management’s incredibly talented speakers, Jason Hewlett delivered an inspired message about the power of collaboration by spotlighting the historic duo of Reginald Dwight (who would later become Elton John) and his decades-long lyricist and business partner Bernie Taupin.

Jason shares the value of turning to the people around you, your colleagues and coworkers, and even what he refers to as “lost members” (those who are no longer associated with you) to help clearly and accurately define what your signature moves are in business.

Collaboration didn’t happen organically for the two rock legends. In a May Time Magazine article, Taupin shares his review of the new movie, and Time’s columnist Andrew Chow sheds light on what was then an unlikely match between singer and songwriter.

“In 1967, they both answered the same advertisement from Liberty Records seeking songwriters. John couldn’t write lyrics; Taupin couldn’t write melodies. But when John was handed an envelope of Taupin’s poems, he was moved by their lyricism and began cutting demos to them.”

“When we started it out it was really just me and him,” Taupin said. “It was very much a sort of stream-of-consciousness,” Taupin said of his own lyrical style. “I would write whatever I felt, and he would jerry-rig it into a song.”

Thank goodness fate brought that illustrious pair together. The world is a better place for the collaboration they shared and the music they’ve made.

Around here, we’re big on collaboration as well. Our amazing team of professionals connect and create together on a daily basis to make what some days feels like magic happen for our talented team of keynote speakers.

Jason Hewlett, we love your extraordinary showmanship, and the way you help audiences all over the globe discover what it means to become a Legendary Leader. As you so profoundly share, leadership is about promises made and promises kept. Keep it up. The world needs more of that!