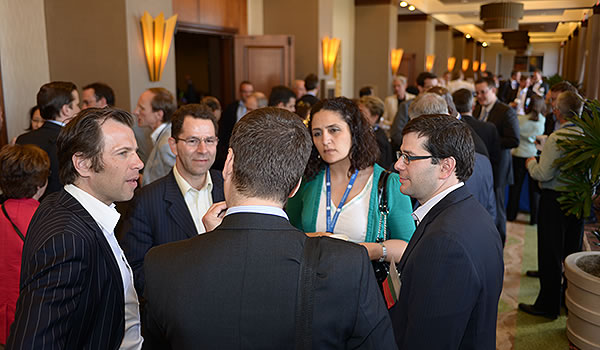 In 2000, I attended my first sales kickoff at Yahoo!.  Our company (broadcast.com) had been purchased by them, and I had just moved to California to lead a sales-enablement/swat team.  Little did I know at the time, but this kickoff event would change my life.

Usually, you'd think that the kickoff's purpose was to introduce new products, arm us with new tools and motivate us to hit the phones or bricks when we got home. But in this case, a single piece of advice changed everything. "Make some friends in unusual places," our Chief Sales & Marketing Officer Anil Singh told me. "Make our international managing directors feel at home. Huddle with the content development guests we've invited -- get outside of your circle." He explained that these relationships I'd force at sales conference would later be important as I worked with global brands on big deals where they needed all of Yahoo!'s capabilities brought to the table.

From the moment I stepped on the kickoff hotel's property, I shook hands and made friends.  My new contacts included managing directors from Yahoo Japan, Italy, Korea, Brazil, Canada and United Kingdom.  They were easy to engage with, and told me about promotions and products they'd built for their clients.  Many of them were news to me! I sought out our non-sales guests, especially those we frequently relied on for post-contract delivery. I told them I wanted to understand more about how their groups worked, so I could pursue revenue but not create problems for them.  At first, they filled my ear with concerns about various programs we were selling, but by the end of conference, they were suggesting new ways we could help our advertisers without compromising the user experience.

Over the next few years, these relationships were rocket fuel for our deals with global brands such as Sony, HSBC and Toyota.  Because I'd developed relationships with international and non-sales leads at kickoff, I knew more about how they could drive a global relationship. Our post-conference conversations built up enough trust so that we could bring them into the sales process early, so they could help us tailor the global deal to each regions unique way of doing business.  When I was promoted to Chief Solutions Officer, I looked back at the 2000 sales conference as my launch point.

If you are in business-to-business sales, you'll likely attend a kickoff early next year or Spring. Don't miss out on the opportunity to network and create a solutions web for future clients.  The more you know about your company's total capabilities and the unique facets of each market it serves, the better you'll do at creating winning recipes for your customers.  Here are some rules of the road for sales kickoff networking:

1.  Set A Goal - I decided that I would connect with at least 10 new people during the 3 day kickoff.  Having that goal kept me focused on adding at least three people to my network each day.  Create your goal based on the unique strategy of your sales organization. If you are focused on global selling, focus on connecting with international attendees.  If improving delivery is the goal, focus on connecting with non-sales leads. If sales collaboration is the priority, meet account execs and managers in other markets or product categories.

2. Go Outside Of Your Work Group - You see these colleagues every day, so don't be lazy and hang with them for convenience at kickoff.  When you eat, find a new group to join.  During breaks, look for friendly but unfamiliar faces.  Think wide.

3. Establish Common Ground - During your encounters, seek out connection points. The best ones are common customers, common sales challenges (product/industry) or common sales opportunities.  Don't be afraid to connect at the personal interest level either.  I've connected over my love of World Cup or electronic music to open up the discussion...usually leading to frank work related conversations.

4. Contract - Strike up some agreement for post-kickoff follow up. It could be information sharing or a conference call based on the business common ground you've established. Don't let new contacts end with the conference. (Now that we all carry smart phones, it's easy to share contacts or simply take a picture of someone's badge or business card for follow up later.)

5. Follow Up - Send a note after you get home, keep any promises you've made and schedule a future time to reconnect.  Putting a process around internal networking ensures that you keep the first burning and establish credibility.  If you've been told about a concern that needs support or attention, be the messenger and marshal resources ... especially if you work at headquarters and have access to internal influencers and power brokers.

6. Expand From This Base Of New Contacts Over the Coming Year - Ask your new contacts, "Who else should I meet and spend time with?" You'd be surprised at how many introductions they will make, sometimes over email or conference calls.  Whatever goal you set for kickoff, add a zero to that number for the networking you'll do over the coming year.  The more you grow this circle, the better you'll be able to serve your customers.

The sales kickoff is important beyond any education or product introductions that happen there.  They can be the social operating system of a sales driven organization, where loose ends are tied and a company truly comes together as a customer-focused team.  Don't waste the opportunity to expand your network ... because it drives your company's net worth!

Baltasar Kormákur, director of the mountain-climbing drama “Everest,” says it took a location-scouting trip halfway up Mount Everest, to a snowy base camp in Nepal, for him to appreciate that it might make sense to have his movie’s audience put on 3-D glasses.

“I had a moment standing there where the volume of the mountain was just so immense, and I was thinking: How can I possibly get this on film? How can I give people at least some of this feeling?” he recalls.

Until recently, simulating three dimensions on theater screens had been a trick primarily aimed at kids in fantasy, sci-fi, and animated movies. Think “Avatar,” “Jurassic World,”“Marvel’s Avengers.” Nobody can question the financial success of those blockbusters, but they also gave 3-D a particular kind of reputation for many filmgoers and filmmakers, as a gimmick best suited for simulating fantastical worlds that don’t really exist.

Martin Scorsese’s “Hugo” in 2011, Ang Lee’s “Life of Pi” in 2012, and Alfonso Cuaron’s “Gravity” in 2013 showed that 3-D could draw adults into emotional films, though those movies still depicted imagined environments.

Director and producer Baltasar Kormákur on the set of ‘Everest’ PHOTO: UNIVERSAL PICTURES

Mr. Kormákur thought 3-D could help tell a true story about the real world, the ill-fated 1996 Everest climbing expedition. The optical effect could help convey the gargantuan scale of the highest mountain on Earth, and, in turn, heighten the emotional impact for audiences by highlighting the risks the climbers confronted. Combined with the large-screen IMAX format, the 3-D depth could serve the movie’s narrative right along with other filmmaking elements: its ambitious camera work, sound, visual effects, and performances from a cast including Jason Clarke, Jake Gyllenhaal and Josh Brolin.

“I fought pretty hard to do it,” says Mr. Kormákur, an Icelandic director whose English-language work includes action films “Contraband” and “2 Guns.” “This was [circa 2012] before ‘Gravity’ came out, and we didn’t have many adult movies playing in IMAX 3-D. It was all about superhero movies.”

Mr. Kormákur pitched the idea to producers as a subtler version of the 3-D that moviegoers associated with comic-book blockbusters: “I said it’s more like two-and-a-half-D. I’m not throwing things at people’s faces. It’s more to create volume inside the screen. I wasn’t looking for moments of surprising people, like ‘bah!’ It’s more like ‘oh...my...god,’ slowly. ‘This is high.’”

The emerging dramatic films for large-format screens have grown partly out of the groundbreaking IMAX documentaries once relegated to science-museum rotundas, meant to offer views of nature’s grandeur that audiences couldn’t see before. One of the top IMAX documentaries of all time, in fact, is David Breashears’ 1998 “Everest.” (The link between filmmakers and Everest stretches to film’s early days; one of the first organized Everest expeditions ever, in 1924, was financed by John Baptist Lucius Noel, a British filmmaker who made a silent documentary about it, “The Epic of Everest.”)

But filmmakers are discovering more subtle potential in 3-D, as a device for telling stories and building emotion. Later this year come Ron Howard’s seafaring drama “In the Heart of the Sea” and Ridley Scott’s “The Martian,” both in 3-D and IMAX. Ang Lee, who directed “Life of Pi,” is in postproduction of “Billy Lynn’s Long Halftime walk,” a 3-D film about soldiers having to return to Iraq after being celebrated as heroes at home.

Wim Wenders has embraced 3-D for his latest small film, “Everything Will Be Fine,” which makes its North American premiere this Friday at the Toronto International Film Festival and opens in theaters in December. It’s not about dizzying heights nor high adventure—it’s an intimate film about a traumatic car accident, starring James Franco, Charlotte Gainsbourg, and Rachel McAdams.

Mr. Wenders, who adopted 3-D to film dance performances for his 2011 documentary about choreographer Pina Bausch, believes 3-D can get audiences closer to people, not just emphasize distance. He calls the technology an evolution in the language of film—he compares it to the advent of sound—and says it has been miscast in fantasy roles.

“It’s for capturing reality,” he says. “What I’m trying to achieve is that you’re closer to people. You’re more immersed in their lives. Overcoming a trauma is a process that happens inside people. My feeling is that 3-D can really look into people’s soul.”