& Learn more about the book and the podcast below.

Listen to the Podcast for Free Here: https://soundcloud.com/mikewalsh/tim-sanders

Who Moved My Future? | Michelle Ray

What Makes the Best NFL Coach?

The True Measure of Leadership

Who is the best football coach in the history of the National Football League?

If we judge football coaches as leaders then is winning percentage or titles won the correct barometer? Is it fair to judge a leader simply by the number of followers they have – like a popularity contest? Or is the ideal standard based on bottom line revenue and growth?

Ralph Nader said, “The function of leadership is to produce other leaders, not other followers.”

Partner leadership is about legacy. It is about empowerment. It is creating commitment in our people, giving them an ownership mentality and inspiring them to step up and contribute at the highest level. If we are to judge based on this standard, we need to look at the question in an entirely different light.

A coaching tree is similar to a family tree except that it shows the relationships of coaches instead of family members. There are several different ways to define a relationship between two coaches. The most common way to make the distinction is if a coach worked as an assistant on a particular head coach’s staff for at least a season then that coach can be counted as being a branch on the head coach’s coaching tree. Coaching trees can also show philosophical influence from one head coach to an assistant.

Coaching trees are common in the National Football League and most coaches in the NFL can trace their lineage back to a certain head coach for whom they previously worked as an assistant.

A coaching tree doesn’t just show winning percentages or Super Bowls, it also shows the leader the coach has created and what they have done in turn.

If we look at the question – Who is the best football coach in the history of the National Football League? – in terms of a coaching tree, then there is one obvious winner. Bill Parcells.

Bill Parcells is part of the NFL Hall of Fame. He won two superbowls and coached in one additional superbowl. But Bill Parcells is more than his own statistics because doesn’t just leave behind a coaching tree, he helped grow a Super Bowl-era Sequoia.

Parcells and his disciples, Bill Belichick, Tom Coughlin and Sean Payton, have combined to win eight of 47 Super Bowls, the sturdiest, most prolific coaching tree in league history. Parcells reflects like a father on those shimmering Lombardi trophies, three by Belichick, two by Coughlin and one by Payton, hoisted by those with whom he shared his most prized team-building and coaching secrets.

Bill Parcells is the Coach of Coaches or in other words the Leader of Leaders in the National Football League. He was extremely successful but his leadership has carried on long after him because of the leaders he has produced.

It's better to have a mind opened by wonder than one closed by belief.

This was the key message of Vinh Giang, magician and communication coach, who delivered the first keynote at the Gartner Symposium/ITxpo in the Gold Coast yesterday.

Solving problems is about gaining some perspective, said Giang, who was 2013 South Australian Entrepreneur of the Year. It's important not to fall victim to the 'silo mentality' of thinking where there is no apparent solution for a problem.

His mentor, a magician in the UK, said when you experience a problem, it appears to be chaotic without an apparent pattern.

But when you show the problem to somebody with a different perspective, they will encourage you to look at the original problem again so you can see a pattern among chaos. That is what wisdom is all about, he said.

“As a business person and human, gather as many different perspectives as you can in life and never fall into a space where you know it all.

“Always gather new perspectives, always collaborate, never stop...this can allow you to move where you want to be.”

Giang also highlighted the power of influence. He recalls when he built his online business people were telling him it could not be done.

“It is your duty to necessarily jump as high as you can, you can never afford to have one negative person in your life.

“People are influencing you ever single second, every single day. You are the direct reflection of the top five people you spend time with,” he said.

“Bring in somebody who brings inspiration to your life to be better, to continuously improve.”

For instance, when he was young, he hardly spoke. His father, a refugee from Vietnam, put him around people who communicated very well.

“It means you get to choose who you want to become with in the future by deciding who you spend your time with today. Stop at nothing to bring your best people in your top five,” he said.

“You get to choose who you are going to become, aim high, reach for people that can dramatically change your life, your characteristics, your values and beliefs.”

His final message is about believing that anything is possible.

“Your beliefs dictate your action. You can tackle any obstacle, you can achieve any goal you desire if you are crazy enough to believe it.”

“Learn how to think like an 8-year-old,” Mike Walsh, author of FUTURETAINMENT and CEO of innovation research lab Tomorrow, said at this year’s PMA Fresh Summit in Atlanta on how to engage the next generation of consumers. Why an 8-year-old? Because anyone born after 2007 will have a completely different view of the world, he elaborated, as exposure to technology fundamentally changes us.

“The next generation of consumers, after a childhood of disruptive technology, will think about shopping, cooking, eating and fresh produce in ways very different from the rest of us,” he said. “Convergent technologies and connected lifestyles mean that everything, even food, is now a digital product.”

Technology and data will challenge our relationship to products and brands, and Walsh pointed to Instagram as one tool that has changed people’s perception of food.

“There’s a fine line between technology and anthropology,” Walsh said.

Beyond social media, there are new ways for brands and products to build relationships with consumers, but it’s going to take leaders who are able to reinvent themselves as technology evolves, Walsh said.

“Labels will be an essential part of the emerging Internet of Things,” Walsh said, citing ThinkFilm’s partnership with Diageo’s bottle labels an example. There’s a “sea change around digital interaction with food.”

On the operations side, the falling cost of drones will create new precision agriculture and flexible low-cost sensors will transform issues of food safety and transportation, according to Walsh. Also, the growing trend of crowdsourcing in creating food technology shows that it won’t just be the big companies that are capable of changing the industry moving forward.

“I believe the future is not an upgrade on the present but rather an invitation to think in an entirely new way,” Walsh said. “Don’t let the future surprise you.”

Walsh provided the following action items for industry leaders to think about in order to successfully engage the new generation of consumers.

This acquisition demonstrates our commitment to execution, extending the impact of CX on organizations through a journey management tool.

“Strativity now takes its value to the next level with the addition of a journey management platform to ensure execution and sustainability,” said Strativity President Lior Arussy, adding that clients can develop and manage journeys on their own knowing that they have access to Strativity, redefining CX execution with the true fusion of technology and consulting.

Touchpoint Dashboard customers will benefit from some exciting new enhancements, such as:

Action planning and management will be provided to all Touchpoint Dashboard clients, enabling a movement from Journey Mapping to Journey Management with live, evolving journeys, beyond the static maps you may expect.

Exclusive access to 10 Members-Only Consultative Workshops with experienced journey mappers and CX professionals providing best practices and tips you can use to get the most out of Touchpoint Dashboard.

This is your opportunity to join the largest community of journey mapping professionals and leverage a tool that will allow you to accelerate success in your organization. For a 15-Day Free Trial of Touchpoint Dashboard, please visit TouchpointDashboard.com.

We hope you will join us in celebrating this new venture. If you’d like to learn more about Touchpoint Dashboard or Customer Journey Mapping, please contact marketing@touchpointdashboard.com. 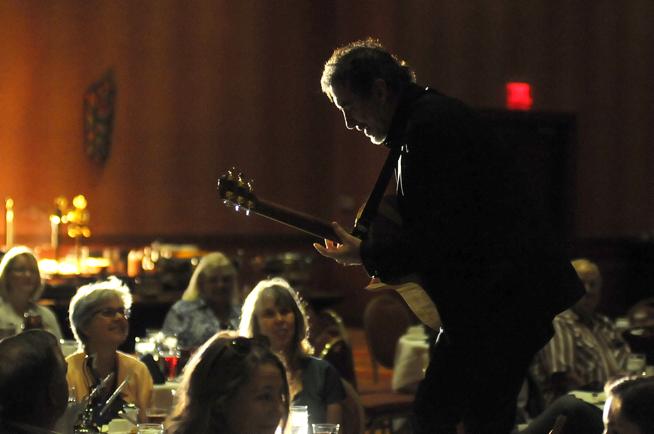 LOVELAND -- The keynote speaker at the city's annual breakfast for business leaders Wednesday played a little guitar, dropped a few celebrity names and imparted some pearls of wisdom to the crowd.

Robin Crow, founder of Dark Horse Recording in Franklin, Tenn., told about 350 local businesspeople at the Business Appreciation Breakfast how he went from being a guitarist and recording artist to a best-selling author, inspirational speaker and the owner of a destination recording studio that counts Taylor Swift, Neil Diamond, Tim McGraw and Matchbox Twenty as its clients.

But first he warmed up the crowd with an energetic guitar solo, and three times during his talk he provided instrumental guitar backdrops to videos showing mostly nature scenes and inspirational quotes from famous people.

Using the example of a 1972 airliner crash that killed 101 people, attributed to the flight crew's distraction, he said, "Too often, business leaders allow themselves to be distracted away from mission-critical functions."

Those critical pieces of success are his "magical formula":

• Creating a culture of passion.

"Change is the new normal," Crow said, and yet, "we're afraid of change."

"Holding onto what's good for you now may be the reason you don't have something better," he said.

He told of practicing the guitar as a teenager for 14 hours a day until his fingers literally bled.

"Eventually when I picked up a guitar, I knew I could make it talk, I could make it sing," he said. "You've got to practice until your leadership fingers start to bleed."

Crow said he learned the importance of customer service when working with country recording artist Faith Hill. He said he would put considerable effort into making elaborate deli sandwiches for Hill's producer, and he learned that the sandwiches and his attention to his customer made an impression.

Exceeding people's expectations is his secret weapon, he said.

To create a culture of passion, he told his audience, they should surround themselves with brilliance — find people who are passionate, show appreciation for people and "swing for the bleachers, think big."

"There's nothing more exciting than a team that's on fire," he said.

by School for Startups Radio

Yossi Ghinsberg - Founder & CEO of Blinq.me and Bestselling Author of Lost in the Jungle

Yossi Ghinsberg is a bestselling author, business motivational speaker, and a riveting storyteller. He has worked with such organizations as BP, Citibank, Qantas, IBM, Hilton, BMW, Proctor & Gamble, and Bayer. He is co-founder and CEO at Blinq.me, which launched its innovative messaging enhancement app which has reached over 250k downloads and rave reviews in just a few months. ‘Jungle’ is his book about his adventures in the Amazon and sold millions of copies worldwide. It was turned into a Discovery Channel docudrama and currently is being adapted to the big screen. He co-founded Chalalan with the Indigenous people of the Madidi Valley in Bolivia. This eco-village has transformed the entire region from exploitation to sustainable industries, mainly tourism and hospitality. He also founded EthnoBios, a research company identifying plant material through Ethnobotany, protecting Indigenous intellectual properties while cooperating with international pharmaceuticals. In 2001, in the midst of the second Intifada, he was invited to produce and manage the biggest music festival in Israel, which involved a grassroots movement of reconciliation between Israelis and Palestinians.